Now one year old, the Redfish Technology ‘One for One’ Community Service Initiative program provides financial support to Sawtooth United Football Club and the Animal Shelter of the Wood River Valley.

As top producer this quarter, Executive Recruiter Jon Piggins had the distinction of donating Redfish Technology’s ‘One for One’ program funds to the community organization of his choice, and he has chosen the Sawtooth United Football Club (SUFC).

“I want to help kids who may not have been able to play because of the expense,” said Mr. Piggins. “and I want to encourage other individuals & local businesses to contribute as well.” SUFC has available a limited number of scholarships and this donation will serve to expand that opportunity. Mr. Piggins presented the check to Sandy Kelly, SUFC President & Treasurer on September 17. 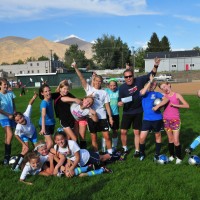 Sawtooth United Football Club’s mission is to encourage the physical, mental and emotional growth of the youth of the Wood River Valley through the sport of soccer. The club strives to enhance the player’s skills and to promote a lifelong love of soccer, while developing knowledge of commitment, self-discipline, sportsmanship and teamwork.

“We are lucky to have such community-minded folks in our valley. This generous gift from the Redfish Technology team and the time that Jon Piggins dedicates to coaching go a long way in making it possible to carry out such outstanding developmental and competitive youth soccer programs,” stated Liv Jensen, SUFC Coach and Board Member. “Thank you Redfish.” 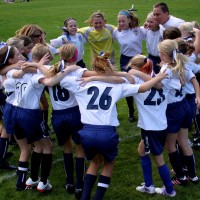 The ‘One for One’ Community Service program began one year ago in September 2012. The program was conceived of by the Redfish Technology recruiters and is carried out by all Redfish staff. The program includes volunteer time by individuals as well as pooled funds that are designated to the community organization by the top producer of the quarter.

Over the summer, Redfish staff volunteered for the Crisis Hotline, Girl Scouts of Rhode Island, Papoose Club, Rhode Island Vegan Awareness, Sawtooth United Football Club, and Sun Valley Center for the Arts. Redfish employees served as coaches, organizers, instructors, mentors, publicity and other functions to help the community organizations near and dear to their hearts. In previously quarters, funds have been donated to the Animal Shelter of the Wood River Valley. 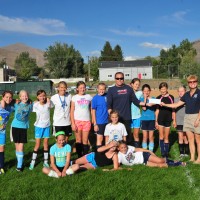 About Redfish Technology’s ‘One for One’ Program:

As a socially responsible company, Redfish Technology – Nationwide IT Recruiters – values investing in our communities and has long attracted employees who volunteer their time and money in local community organizations. The ‘One for One’ initiative formalizes the company values by donating money and volunteer hours for each professional job placement that the company makes.

Jon comes from a long tenure in sales and business development working in both B2B and B2C environments. Prior to joining Redfish Technology, he was Partner and Vice President of Business Development of a Commercial Services company in San Diego. Having sold that successful venture, Jon packed his family and bags and headed for the mountains, where he coaches youth soccer among other things!