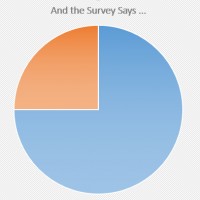 For the fourth consecutive year, Bullhorn has conducted its Staffing and Recruiting Trends survey. As a recruiting software editor and service provider for fourteen years, Bullhorn works daily with the external and internal recruiters providing the staffing for fast-growing start-ups up through the world’s largest employment brands. The latest survey completed in the December of 2013 polled 1,337 agency recruiting professionals and serves up interesting reading for staffing aficionados.

2013 was a great year in recruiting! Three-quarters is the magic number in this report in terms of the findings of most interest. Three-quarters of those surveyed met or exceeded their revenue goals which tops the preceding years of this survey (2010, 2011, 2012).  And while three-quarters of firms plan on hiring internally in 2014 that is a bit lower than the eighty-two percent with such plans in 2013. Almost three-quarters of survey respondents report a shortage of skilled candidates within their sectors.

More stats of note: Average time-to-fill in 2013 was 32 days for permanent placements. Just shy of half of placements were with candidates from internal databases. The best source of qualified candidates was those existing candidates in the applicant tracking systems, followed by referrals and social media. Almost three-quarters of respondents generate 50% or more of their revenue from repeat client business. 75% of respondents from large firms considered recruiting technology very important.   To read the all the insights and latest info, read Bullhorn’s report “2014 A Numbers Game North American Staffing and Recruiting Trends Report from Bullhorn” at: pages.bullhorn.com/EB140218_TrendsReportNA.html