Tech salaries leading the way overall, but not so much for women. 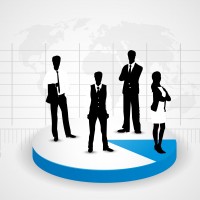 In San Francisco, which is a leading are for top pay in tech, health care, and finance, even for new grads the pay is rising faster than other areas. Annual full-time salaries in San Francisco increased by an average of 2.8% from the first quarter of 2014 to 2015, whereas nationally the increase was only 1.8% during the same time.

Glassdoor’s top three highest-paying positions in the City are all in tech, according to Brianna McGurran of NerdWallet, who has writes that data scientist’s earn $127,000 a year, software engineers $103,000, and database administrators $77,000.

Healthcare and finance are big business paying well in San Francisco, and not surprisingly there’s a lot of innovative interplay between tech and finance with great opportunities in EdTech, eLearning, eCommerce, ePayments, and … well if you can imagine it, there’s probably a Bay Area startup working on it. While tech startups don’t always have the highest base salary, the equity component is often very attractive.

Women in tech are lagging in number

Women make up 57% of the workforce and earn 57% of the undergraduate degrees in the U.S. and yet they only represent 25% of computing occupations, 20% of CIO positions at Fortune 250 companies, and 18% of computer science degrees.

There are many reasons that women are not attracted to tech or motivated to stay, ranging from culture to logistics. A Quartz article The tech industry’s woman problem: Statistics show it’s worse than you think tries to quantify the problem that is obfuscated by many tech companies. Tech Republic’s article IT gender gap: Where are the female programmers? discusses a great number of potential reasons.

And women’s salaries are lagging too

And yet, women are leading adopters in many technologies, and there are many women tech entrepreneurs and leaders. “[W]omen-operated, venture-backed high tech companies average 12 percent higher annual revenues. They also use on average one-third less capital than male counterparts’ startups,” according to the We Need More Women in Tech: The Data Prove It article in The Atlantic.

There are many ways to address the gender imbalance in the tech workforce and tech salary inequality. Here are just a few examples:

Hire a great and diverse team

Founded in Silicon Valley in 1996, Redfish Technology is an award-winning talent acquisition firm specializing in high tech sectors. Partnering with growth mode companies, small and large, Redfish staffs executive functions and builds out the teams below. Redfish knows talent and good companies – we’ve been named #1 Best Places to Work in Idaho three years in a row!