Production and Pricing – Fruits of Policy or Market Forces?

The second debate and the many positioning opportunities the presidential candidates have taken show a distinct difference in policy approach. The flamboyant statements that are seized upon as sound bites are often used out of context. Here are some recent claims from both Obama and Romney, and a fact-check to bring it back. END_OF_DOCUMENT_TOKEN_TO_BE_REPLACED

The 100 Most Promising Private Cleantech Companies

The Cleantech Group LLC has recently published its “2012 Global Cleantech 100” report – an exciting list of the most promising privately-held Cleantech companies replete with thoughtful and well-researched information on the various component sectors. Redfish Technology is proud of the recruiting relationships we have with a large number of these winning cleantech firms. END_OF_DOCUMENT_TOKEN_TO_BE_REPLACED

Indeed.com trends show the rise in demand for these two categories, as well as java and mobile criteria in the job search terms. Other skills criteria going strong include virtualization, big data, cloud and saas. Other growing sectors include information security, data security, application security, governance-risk-compliance.

Redfish Technology is currently recruiting for software engineers, QA, user experience positions as well as sales and product marketing roles across the country. See our priority hiring on the blog Catch of the Day, or search all jobs on our website.

Green Jobs Network, a leading online platform for people seeking jobs that focus on environmental or social responsibility, and Redfish Technology, recruiters in High Tech and Clean Tech, announced that they will offer a webinar entitled “Accelerate Your Green and CleanTech Job Search.”  It will be held on October 3rd from 1:00–2:00pm Eastern and is free for job seekers, career advisors, and workforce development professionals nationwide. END_OF_DOCUMENT_TOKEN_TO_BE_REPLACED

The Information Technology sector continues to expand so far in 2012. Investment continues both in infrastructure and in staffing. Software developers, Health IT, and Security Cleared IT are in high demand. The Bureau of Labor Statistics projected that from 2008 to 2018 Computer Software Engineers 283,000 jobs will be added. This adds to the competition for talent

Along with the increased competition for IT talent, are increased salaries, according to the 17th annual Redmond Salary Survey. Salaries stagnated for some years but many employers are seeing the wisdom of salary increases to current employees in order to stay competitive and retain technical talent.

There is also movement by employees at companies that are not giving raises. Despite very specific needs and employer demands for very specific skill sets and experience, for those who change companies, there is an associated salary increase. Given the 3.6 percent unemployment rate among IT workers that upward pressure on salaries looks set to continue.

According to the ESJ Salary Survey 2012 Part 1, the largest jump in salary was awarded to enterprise architects (up 10 percent), and Internet managers got the largest bonuses (up 55 percent). Across the board IT professionals in application areas such as SOA, business intelligence and analytics, and enterprise resource planning (ERP) saw salaries rise.

But it isn’t only IT professionals who stand to benefit from raises, according to the recent U.S. Compensation Planning Survey by Mercer, most U.S. employers plan on increasing base salary in 2013. Those who stand to benefit the most are predicted to be the top-performing talent, i.e. the top 8 percent of the workforce.

The latest MoneyTree™ Report shows that of all the Venture Capital industries, Software leads the pack in garnering VC investment. At $1.6 billion dollars of investment this first quarter, the industry raised almost 20% less than last quarter’s $2 billion. The most deals to be completed category also goes to the Software industry, at 231 rounds for a 12 percent decrease over 2011’s 262 rounds in the last quarter.

This quarter’s second place winners in dollars invested were the Biotechnology and Industrial/Energy sectors in a near tie at $780 million and $778 million respectively. In terms of first-time rounds in the first quarter, companies in the Software, Media & Entertainment, and the IT services industries received the most.

Clean Technology – which crosses over traditional MoneyTree industries, includes alternative energy, pollution and recycling, power supplies and conservation – garnered $951 million in 73 deals, down 30 percent in dollars and 11 percent in volume.

Ranking in the top ten deals of Q1 were two Internet-specific deals. Internet-Specific is a cross classification that is independent of an organization’s primary industry category. Investment in internet companies, those whose business model is fundamentally dependent on the Internet, continued at over $1 billion dollars per quarter, a trend that is in its eighth consecutive quarter. As compared with last quarter, investment in internet-specific deals was down 3 percent in dollar volume and down 23 percent in deal volume.

The geographic magnet continues to be Silicon Valley, where 36 percent of the $5.8 billion of U.S. investment landed. Second place was taken by New England, and third by LA/Orange County.

Information herein is drawn from the MoneyTree Report which is published on a quarterly basis. It is a look at the venture capital investment activity in the United States. The report is a co-production of PricewaterhouseCoopers and the National Venture Capital Association, based upon data from Thomson Reuters. Read the entire report on the PWC website.

Redfish Technology is an executive High Tech recruiter, the search firm works with a variety of companies from innovative start-ups to global Fortune 500. Through the dot-com and the dot-bomb, the company continues to recruit top talent in SaaS, Cloud, Digital Media, Mobile, Networking, e-Learning, Software, Unified Communications, and related ICT and High Tech sectors. 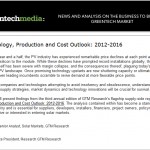 The first quarter of the year was the second highest on record for solar installations. 18,000 photovoltaic (PV) systems were installed generating a total of 506 megawatts (MW) of power. Residential and non-residential PV systems markets grew despite the uncertainty of project finance availability and import tariffs. END_OF_DOCUMENT_TOKEN_TO_BE_REPLACED

“What’s the biggest challenge facing companies that bank with you?” asked John Cook from Geekwire.

The Deloitte reSources 2012 Study is Available

The energy marketplace is dynamic, being continuously influenced by economic conditions, technological developments, regulatory requirements, and customer expectations and behaviors. What are residential consumers and businesses thinking and doing about energy consumption and provider choice as the U.S. economy shows signs of stabilizing? Is corporate progress on energy management likely to continue as the easier tactics are implemented and greater investment is required? To what degree are consumers actually interested in purchasing energy-related products and services, including emerging technologies? END_OF_DOCUMENT_TOKEN_TO_BE_REPLACED