Despite ADP’s optimistic report of 215,000 new private sector jobs, the U.S. Department of Labor reported gains of 168,000 in private payrolls, which was slightly higher than analysts’ forecasts. The overall growth in employment including government cutbacks netted an increase of 155,000. November payrolls were revised upward.

The goods-producing sector rebounded by 59,000 in December after a loss of 1,000 in November. Construction jobs also showed gains of 30,000 following a November dip of 10,000. Manufacturing increased 25,000 over a small increase of 5,000 the month before. END_OF_DOCUMENT_TOKEN_TO_BE_REPLACED

Jobs Up, Unemployment Rate Down, Bullhorn Up, Monster Down

The jobs report showed 176,000 jobs created in November, outdoing analysts’ forecasts of only 80,000. Private payrolls accounted for 147,000 of these new jobs. The unemployment rate dropped to 7.7%, a 4-year low. END_OF_DOCUMENT_TOKEN_TO_BE_REPLACED 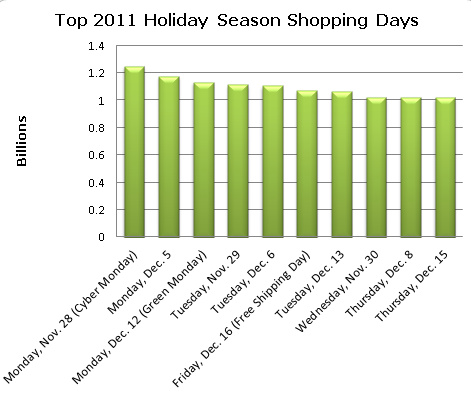 Cyber Monday is a marketing term for the Monday after Thanksgiving’s online shopping extravaganza. It is the online retail equivalent of Black Friday, the Friday following Thanksgiving Day.

In 2011, Cyber Monday was the biggest day in the history of US e-retailing at $1.25 billion in online retail sales, and beat the other top holiday shopping days.

END_OF_DOCUMENT_TOKEN_TO_BE_REPLACED

Staffing jobs rose 5.4% higher in Q2 2012 than in Q2 of previous year. The ASA staffing index also shows a rise in in temporary and contract employment of 26.6% since the beginning of 2012.

Consumer confidence rose significantly in September, in surveys from both the University of Michigan and the Conference Board. This represents the strongest rise in confidence since December. Analysts speculate that confidence may be inspired by the simultaneous gains in housing and stock prices, which haven’t shown such returns simultaneously since 2006.

What does October hold in store for us?

While ADP projected a gain of 201,000 private payrolls last Thursday, the very next day the BLS employment data reported that only 103,000 private sector jobs were created. The anemic jobs report begs the question of whether the Fed will start another round of easing. END_OF_DOCUMENT_TOKEN_TO_BE_REPLACED

The numbers came in a bit better than expected overall as companies hire at a modest pave. Nonetheless the unemployment rate went up incrementally from 8.2 to 8.3%,

While the Fed was discussing more quantitative easing, the Dow Jones reacted favorably to the jobs report.

The staffing industry lost 43,600 jobs (down 1.7%) from June to July according to the BLS, year over year however the industry has grown headcount by 10.9%. Recruiting trends are cyclical and July tends to be a slower month for hiring.

Pace of Hiring Rose in July, but Jobless Rate Ticked Up

Jobless claims hit the lowest levels in six weeks at the end of June, and ADP projected private payroll growth at 176,000 for the month. The staffing industry led employment growth by adding more than 25,000 jobs, an increase of 10.7% more jobs than a year ago. The Monster Employment Index jumped 6 points to 153 in June reflecting a strong uptick in online recruiting. Nonetheless the BLS reported only a modest 80,000 net gain in jobs, leaving the unemployment rate unchanged at 8.2 percent.

The BLS report shows positive signs: gains in manufacturing employment and production hours, and a rise in aggregate earnings. Hiring demand is strong in transportation & warehousing, pointing to strength in the supply chain and retail trade. There is some strength in the goods-producing sector, which added 13,000 in June. Professional and business services added 47,000 jobs during the month. The health care, wholesale trade, manufacturing, construction, and mining sectors all increased by various amounts.

“Businesses continue to be very cautious about hiring in the current uncertain economic environment,” says Richard Wahlquist, president and chief executive officer of the American Staffing Association. Employers remain hesitant “due to uncertainty about the current strength of the economy and future economic conditions, including impending tax increases and spending cuts expected to take effect in January 2013. In times like these, businesses are being much more strategic in sourcing additional talent.”

In May, the Conference Board Leading Economic Index for the U.S. edged up 0.3% to 95.8. “Economic data in general reflect a U.S. economy that is growing modestly, neither losing nor gaining momentum,” says Ken Goldstein, economist at the Conference Board. “The result is more of a muddle through.” However, the Conference Board Measure of CEO Confidence, which had improved in the first quarter of this year, decreased in the second quarter.

Big Disappointment in the Jobs Numbers this Month.

The pace of hiring slowed sharply, and the weakness was across the board. Some economists attribute this to employers taking the sideline in the midst of economic uncertainties in Europe and fears of a global slowdown.

March and April were both downwardly revised by about 50,000 jobs. Unemployment rate rose for the first time in almost a year, to 8.2 percent from 8.1 percent.

This month marks the third year since the Great Recession officially ended. And yet, we have a net of 5 million jobs less than we did in December 2007.

That said there are sectors that remain strong and optimistic. END_OF_DOCUMENT_TOKEN_TO_BE_REPLACED

April Showers Turn Out to be a Drizzle.