According to the Association of Executive Search Consultants’ (AESC), 66% of search professionals have a positive prediction for their industry in the second half of the year.  The biggest growth in demand for senior talent is in the Energy/Natural Resources sector. The United States is experiencing a “sustained resurgence of demand” according to AESC President, Peter Felix. Worldwide, the General Management/CEO/COO functions are anticipated to experience the greatest shortage of talent, followed by Business Development and then Engineering. END_OF_DOCUMENT_TOKEN_TO_BE_REPLACED

“As the market heats up, candidates no longer go months without returned phone calls, but rather, quite the opposite,” reports Executive Recruiter Joanna Edwards. “With a positive shift in the economy comes a new set of challenges that hiring managers must be prepared to combat.” 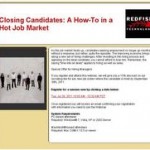 Closing Candidates: A How To in a Hot Job Market

As a corporate matchmaker, it is Redfish’s mission to help companies find their ideal candidates. In response to changing market conditions, Redfish has been advising companies on evolving talent acquisition strategies. The dialogue continues in the first of a new series of webinars for hiring managers in the High Tech and Green Tech industries: “Closing Candidates: A How To in a Hot Job Market.”

END_OF_DOCUMENT_TOKEN_TO_BE_REPLACED

Gloom and confidence, contradictory predictions on hiring and profits

The Employment Report for June has been called “moribund” and “abysmal”. On the eve of the report however, ADP predicted month-to-month strength in private payroll data, estimating a 157,000 gain. Other analysts also predicted better gains, projecting 125,000 in June. Instead, the BLS reported private payrolls at 75,000 and overall nonfarm payrolls at 18,000 due to declines in government sector employment (39,000 in June, 48,000 in May).

Confidence down despite projected rise in profits

The Conference Board measure of CEO Confidence dipped in the second quarter to 55, after rising in Q1 to 67. Lynn Franco, Director of The Conference Board Consumer Research Center said: “CEO confidence cooled considerably in the second quarter, a reflection of a sluggish U.S. economy. Looking ahead, expectations are that this slow pace of economic growth will continue. Regarding the outlook for profits over the next 12 months, the news was a bit more favorable, with about 70 % of CEOs anticipating profit increases.”  END_OF_DOCUMENT_TOKEN_TO_BE_REPLACED

Lower Private Payroll Numbers than Expected, partially due to Re-entry of Discouraged Workers in April?

The jobs market gained momentum over the last few months; in the prior three months the number of jobs added averaged 220,000. The May figures released today however came in lower than expected. While private-sector employment added 83,000 jobs, this was a disappointing reversal of previous months’ growth. Expanding Industries include professional and business services (+44,000), health care (+17,400) and mining.

When an economy is healthy, monthly payrolls gains of around 150,000 are considered healthy; in order to recover from a downturn economists expect increased upwards of 250,000 monthly.

The Bureau of Labor Statistics release questions whether the May numbers are a temporary soft spot or a new trend. Severe domestic weather is not apparently a factor according to the Labor Department, but high energy prices and Japan’s continuing challenges probably are.

“There are good reasons to suppose the third quarter will be better because we have seen some easing in commodity prices, gasoline prices are starting to come down and the bad effects on vehicle production of the Japanese problems will start to unwind,” said Nigel Gault, chief U.S. economist at IHS Global Insight in Lexington, Massachusetts, reported Reuters.

The good news is that initial jobless claims have eased from elevated levels. And while the unemployment rate rose to 9.1 percent last month from 9.0 percent in April, this is probably due in part to the re-entry of discouraged workers who were motivated by the April hiring momentum, and re-entered the job market.

Most Robust Growth in 5 Years, Yet Mixed Messages about the Employment Outlook

Friday’s employment situation report released by the Bureau of Labor Statistics was stronger than anticipated with non-farm private payroll showing increased employment of 268,000 last month, surpassing March’s strong showing of 231,000. This growth is the most robust in five years, and marks the seventh straight month of employment increases. Nonetheless, jobless rate climbed and government jobs fell by 24,000.

The 43,000 surge in jobless claims is explained by various factors but nonetheless was higher than last month. The unemployment rate went from 8.8% to 9.0% month over month. The longer trend remains positive: “The economy has added 2.1 million private sector jobs over 14 consecutive months, including more than 800,000 jobs since the beginning of the year. The unemployment rate rose to 9.0 percent, but remains 0.8 percentage point below its November level”, according to Austan Goolsbee, Chairman of the Council of Economic Advisors. END_OF_DOCUMENT_TOKEN_TO_BE_REPLACED

We had good news on the hiring front last week as the Association of Executive Search Consultants proclaimed 2010 to be the “Year of Resurgence” and the Business Roundtable’s first quarter 2011 CEO Economic Outlook Survey anticipated higher sales, increased capital expenditures, and additional hiring over the next six months, as well as a predicted real GDP growth at nearly 3% in 2011.

The Jobs Report backed up this optimism last week; March’s payroll employment gained 216,000, higher than the 200,000 predicted. January & February revisions were also higher by 7,000. While this is below the approximately 300,000 jobs needed on a monthly basis for significant impact on the unemployment rate over the next 5 years, it does surpass the 150,000 needed to keep pace with population growth. END_OF_DOCUMENT_TOKEN_TO_BE_REPLACED

of Development.  Mr. Nacsin is a veteran executive recruiter, with extensive ties in the high tech sector across the nation. “We are excited to be working with Andy again. He has valuable relationships, and an incredible ability to build and manage partnerships, both of which will be leveraged in his new role as Director of Development,” said Rob Reeves, CEO/President of Redfish Technology. “Hiring Andy into this role is part of our commitment to greater participation and partnerships in the High Tech sectors, and reflective of the volume and importance of our business in the Bay Area”. END_OF_DOCUMENT_TOKEN_TO_BE_REPLACED

Good News on the Hiring Front

2011 continues to get busier. Following a great 2010 in which Redfish Technology Inc. more than doubled our revenue, we are enjoying a very strong first quarter. This rebound is being felt within the recruiting industry and American businesses in many industries.

The Association of Executive Search Consultants proclaimed 2010 to be the “Year of Resurgence” for Executive Search Industry. Their end of year report released in March indicates that Senior Executive Recruiting is at the third highest level ever as the demand for senior talent rebounds. While 2009 saw a contraction of 32.5%, in 2010 the industry is reported to have grown by 28.5%. According to AESC this only 13% below the industry climax of 2008.

Peter Felix, President of the AESC, stated that “Leadership today is at a premium since organizations cannot ignore the challenges of new competition, evolving technology, industry convergence and globalization. Finding and attracting the superior executive talent able to manage change of this magnitude is an investment process of the highest order and requires optimum professional help.”

The Business Roundtable’s first quarter 2011 CEO Economic Outlook Survey was released yesterday with an equally exciting prognosis. CEOs of America’s leading companies are reported to anticipate higher sales and plan to increase capital expenditures and employment over the next six months. These top executives collectively estimate real GDP growth at nearly 3% in 2011.

“With today’s survey results, the last three quarters have shown steady improvement in the CEO economic outlook. Our CEOs see momentum in the economy over the next six months, with increased demand fueling greater investment and job creation,” said Ivan G. Seidenberg, Chairman of Business Roundtable and Chairman and CEO of Verizon Communications. “This shift continues a trend as reflected in recent employment data, with the private sector leading the way in creating more jobs.”

The Redfish Monthly Industry newsletter will be out next week. Subscribe today and get news and articles on staffing & employment, industry trends, HR best practices, career advice, guest & recruiter perspectives.

Before the revolutions started driving oil prices up, there was some heady optimism. It persists despite the anticipated impacts of expensive oil. Americans must be feeling optimistic, “auto sales reportedly rose 27% in February”, NPR reported, “as the economic recovery continued and consumers felt more comfortable taking on a car payment.”

The jobs report today showed a “respectively healthy gain” for the month of February, at 192,000, and December and January revisions were up a net 58,000. Professional and business services, health care, transportation & warehousing, construction, mining, and manufacturing all showed increases. ADP estimated yesterday that February’s private payrolls increased by 217,000 (a little higher than today’s report), and the Monster employment index went up 7 points to 129 in February with a sharp pick-up in online job recruitment. END_OF_DOCUMENT_TOKEN_TO_BE_REPLACED

Bernanke Weighs In, CEOs Too

Growing Optimism on the Hiring Front

The Fed chief also gave a somewhat more positive assessment of the employment situation, after last Friday’s report showing the nation’s unemployment rate falling to 9% last month from 9.4% in December and 9.8% in November.

He said: “Notable declines in the unemployment rate in December and January, together with improvement in indicators of job openings and firms’ hiring plans, do provide some grounds for optimism on the employment front [1].

In spite of this week’s conflicting short term data, we should be celebrating that the U.S. unemployment rate dropped unexpectedly to a low unseen since April 2009: 9%. Better yet, numerous surveys and CEO reports are optimistic: the outlook for 2011 is to refocus on innovation, competition, and hiring [2].

Redfish Technology reports surging demand in Software as a Service and Cloud Computing as well as Solar and Clean Tech companies, “From VP of Sales in high tech positions to PV Project Engineers, END_OF_DOCUMENT_TOKEN_TO_BE_REPLACED