Last year was a challenge for the clean energy sectors. Layoffs, bankruptcies, decreased funding, and politics, beleaguered the industry. This year, politics are in play again; assaults on state-backed renewable portfolio standards are being mounted on several fronts.

There is plenty of good news too however.

The need for clean tech hasn’t gone away however. The world population continues to expand, straining precious resources of clean air and water. Climate change has undoubtedly played a role in an ever increasing number of weather disasters. The Obama administration has redoubled efforts to grow renewable power and energy efficiency. Clean-tech is increasingly competitive in terms of pricing, wind and solar are reaching cost parity in both utility-scale and distributed markets. END_OF_DOCUMENT_TOKEN_TO_BE_REPLACED

END_OF_DOCUMENT_TOKEN_TO_BE_REPLACED

Do It Yourself Recruiting

When helping new clients on their hiring priorities, I encounter a common thread that some think recruiting fees are costly and somehow easy to earn. Recruiting fees are typically a percentage of the first year’s salary, and yes, that can amount to a large figure when hiring executives and top performers. During a recent webinar on Closing Candidates in a Hot Market, an attendee asked “Why should I use a recruiter, they seem expensive for a job I can do on my own.” END_OF_DOCUMENT_TOKEN_TO_BE_REPLACED

The amount of venture capital entering cleantech will decline in 2012 for the first time since the global economic downturn in 2008, according to cleantech analysis and consulting company Kachan & Co.

The firm, with offices in San Francisco, Toronto and Vancouver, has published a set of predictions for the cleantech sector in 2012.

In brief, the predictions include:

Cleantech venture investment to decline – Kachan expects cleantech venture in 2012 to show its first decline in 2012 after three successive years of growth from the financial crash of 2008. Among the factors the company expects will continue to contribute to the health of the cleantech sector are China managing its economic turbulence, a forecasted rise in oil prices, global corporations’ even stronger role in cleantech, continued solar innovation and persistence of the fundamental drivers of cleantech. But these factors are overridden, the company believes, by other factors it feels will undermine the sector.

“Investors’ own fundraising is getting harder. There’s waning policy support in the developed world. Negative sentiment from the last few quarters hasn’t been reflected in deals, which have a long lead time. Cleantech VCs are, on average, still protecting existing investments over making new ones. And macro-economic turbulence, even collapse, is the elephant in the room,” said Dallas Kachan, Managing Partner, Kachan & Co. “Negative clean and green rhetoric in America, which is still smarting from the Solyndra bankruptcy, could foster a self-fulfilling prophesy in 2012.”

Venture dip made up for by rise in corporate involvement – The world’s largest corporations woke up to opportunities in cleantech in 2011, making for record levels of mergers and acquisitions (M&A), corporate venturing and strategic investments. Kachan & Co. predicts even more cash-laden companies to continue to buy their way into clean technology in 2012, supplementing the role of traditional private equity and showing a maturation of the cleantech sector.

Storage investment to retreat – Significant capital has gone into energy storage in recent quarters. In the third quarter of 2011, the last quarter for which numbers are currently available, storage received $514 million in 19 venture deals worldwide, more than any other cleantech category. Kachan does not expect storage to remain a leading cleantech investment theme in 2012, however.

An analysis of the numbers shows the 3Q11 storage figure artificially inflated by large investments into stationary fuel cell makers Bloom Energy ($150 million) and ClearEdge Power ($75 million.) Kachan does not expect many similar-sized investments into the 60 or so competing companies in that market.

Grid level renewable power storage, also a popular investment theme, was cited by Kachan as a technology with potentially a limited market window.

“Smoothing the intermittency of renewable solar and wind could be less important if utilities embrace other ways to generate clean baseload power in the future, such as new, safer nuclear options emerging that don’t create nuclear waste, power derived from renewable natural gas, geothermal, marine or other methods,” said Kachan. “All of these promise to be less expensive when the cost of storage systems required to make solar and wind dispatchable is factored in.”

Marine energy to begin coming of age – 2012 will not be the year wave, tidal and ocean thermal energy conversion-based power becomes cost-competitive with coal, or even nearly. But expect to hear more about marine power in 2012, Kachan & Co. predicts, and expect to see increased private and corporate funding. The firm points to increased numbers of marine power trials around the world and recent strategic investments by large companies like Siemens.

Increased water and agricultural sector activity – Kachan & Co. predicts increased venture investment, M&A and public exits in water and agriculture in 2012. Industrial wastewater is driving growth in today’s water investment, with two of the top three VC deals of the last quarter focused on solutions for produced water from the oil and gas industry, and the largest M&A deal also focused on solutions for oil and gas.

“Expect to hear more about agricultural investment opportunities in 2012 because of growing awareness of the complex interrelationship between water, energy and food, increased awareness of the planet’s population growth rate and how it’s going to impact our ability to feed the world, and our reliance on inexpensive oil and gas, petroleum-based fertilizers and hybrid seeds for today’s crop yields,” said Kachan.

Read the firm’s predictions for cleantech / greentech in 2012 in their entirety.

About Kachan & Co.
Kachan & Co. is a cleantech research and advisory firm with offices in San Francisco, Toronto and Vancouver. The company publishes research on clean technology companies and future trends, offers consulting services to large corporations, governments and cleantech vendors, and connects cleantech companies with investors through its Hello Cleantech™ and Northern Cleantech Showcase™ programs. Kachan staff have been covering, publishing about and helping propel clean technology since 2006.

Happy Holidays from our team to yours!

Whether you will get merry at Christmas, illuminated at Hanukkah, or dec’d out for Kwanzaa, we hope you have a great yearend!

Redfish is celebrating a great 2011.

“Amid the Noise and Haste of 2011, we’ve managed to stay the course we set and solidify our partnerships in both the Tech Sector and the Clean Tech Sector. END_OF_DOCUMENT_TOKEN_TO_BE_REPLACED

The Mo Fish are bristling! 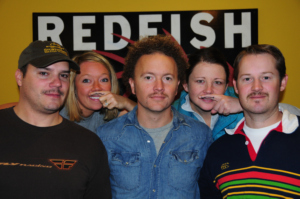 The Mo Fish. Redfish is bristling for Movember

Clean Tech has never been so unshaven …

IT has never been itchier …

Hiring has never been so hirsute!

During November each year, Movember is responsible for the sprouting of moustaches on thousands of men’s faces, in the US and around the world. With their Mo’s, these men raise vital funds and awareness for men’s health, specifically prostate cancer and other cancers that affect men.

The Redfish Mo Bros and Mo Sistas got on board to help raise awareness for men’s health. Our office is bristling and hirsute for the month of Movember.

To learn more about Movember and Mens’ health issues, visit the Movember website.

To learn more about our awesome team of IT & Clean Tech executive search experts, visit the Redfish Technology site.