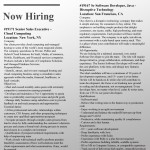 What are the hottest growth cities in the tech/STEM sectors?

Interestingly, Silicon Valley isn’t in the top five despite the preponderance of high profile tech companies there. In fact, despite offering the most tech and STEM jobs in the U.S., Silicon Valley employed 170,000 less folks in 2011 than in 2000.

Coming in number one is the Seattle-Tacoma-Bellevue metro, with increased tech employment of 43% and STEM of 18% in the decade from 2001 to 2011. The last two years documented 12% growth in tech jobs, and 7.6% growth in STEM jobs. END_OF_DOCUMENT_TOKEN_TO_BE_REPLACED

On all fronts, solar is heating up.
Polemic in congress and by detractors, job & export creation by US firms, and public support.

The bankruptcy of solar panel manufacturer Solyndra, and ensuing reports of fat bonuses and misconduct, are fueling the detractors and absorbing the media and congress. But let’s not get so focused on the Solyndra tree that we can see the Solar Promise forest. China is investing billions into their clean tech companies, and they certainly have factored in that some will fail.

The China Development Bank has put $30 billion in credit into solar companies in 2010. The CDB has announced financial commitments of at least $15 billion to aid companies in the nascent wind industry; and China plans on investing around $45 billion in smart-grid over the next five years. Solyndras’ potential loss of $528 million is 1.7% of the solar commitment by the CDB; and 0.5867% of the solar-wid-smart grid investments above. There’s a big forest out there.

The Solar Foundation’s recent “National Solar Jobs Census 2011: A Review of the U.S. Solar Workforce” report found that more than 100,000 Americans are now employed in the solar industry. The solar industry’s job growth rate is 6.8%, which is much higher than the 2% net job loss in fossil fuel power generation and the general economy’s anemic job growth. And manufacturing jobs in solar grew almost 25 %, while solar sales and distribution jobs had the strongest growth and next year is anticipated to grow 35%.

California is the national leader in solar employment accounting for ¼ of the US solar jobs. The top 10 solar employment states are Colorado, Arizona, Pennsylvania, New York, Florida, Texas, Oregon, New Jersey and Massachusetts. Colorado, Arizona, Florida, Oregon, New Jersey and Massachusetts. The Census found that solar employers anticipate increasing jobs by 24% by August 2012; and over the next year, almost half of solar firms expect to add jobs. The US Solar Industry exported a net $1.9B in 2010, according to GTM Research and SEIA.

9 out of 10 Americans Support Solar according to the 2011 SCHOTT Solar Barometer, conducted annually by independent polling firm Kelton Research. Key findings of the survey include:

The economy grew last quarter at the fastest pace in a year (yeah!), but job growth remains fairly anemic.

The economy grew last quarter at the fastest pace in a year (2.5%), however that growth was still insufficient to push down the unemployment rate. GDP is estimated to grow at just over 2% in 2012, and 2.7% in 2013, a gradual improvement.

While October saw less job creation than forecast, the unemployment rate did dip to 9% (from 9.1% last month).

Insperity Inc.’s latest business confidence study found that 26% of small to midsize businesses plan to add staff and 66% plan to maintain current staffing levels. Nearly half of small-business owners think that the economy will not improve until the second half of 2012, with 44% anticipating an economic rebound in the second half of 2012 or later. The CMO Survey finds that CMOs are planning on increasing marketing spending over the next year, by 7.2% on marketing hires.

IT and Clean Tech recruiters, such as Redfish Technology, report a very strong quarter. Solar and Software as a Service being two leading sectors of employment at this time. Online job posting activity is up by 11% year-over-year according to the Monster Employment Index.

Job growth improved more than expected in September. Payroll jobs advanced 103,000 in September despite government sector contraction – private non-farm payrolls gained a total of 137,000 in September, following a 42,000 increase in August and 173,000 in July. Friday’s employment report shows that the labor market is not quite as sluggish as earlier believed. END_OF_DOCUMENT_TOKEN_TO_BE_REPLACED

Most Robust Growth in 5 Years, Yet Mixed Messages about the Employment Outlook

Friday’s employment situation report released by the Bureau of Labor Statistics was stronger than anticipated with non-farm private payroll showing increased employment of 268,000 last month, surpassing March’s strong showing of 231,000. This growth is the most robust in five years, and marks the seventh straight month of employment increases. Nonetheless, jobless rate climbed and government jobs fell by 24,000.

The 43,000 surge in jobless claims is explained by various factors but nonetheless was higher than last month. The unemployment rate went from 8.8% to 9.0% month over month. The longer trend remains positive: “The economy has added 2.1 million private sector jobs over 14 consecutive months, including more than 800,000 jobs since the beginning of the year. The unemployment rate rose to 9.0 percent, but remains 0.8 percentage point below its November level”, according to Austan Goolsbee, Chairman of the Council of Economic Advisors. END_OF_DOCUMENT_TOKEN_TO_BE_REPLACED

from the Redfish Technology November Newsletter

The BLS statistics were encouraging. Nonfarm payrolls were increased by 195,000 jobs in October. The private sector created 151,000 of these jobs, marking the 10th consecutive month of job growth. Almost 1/3 of these increases were in “professional and business services” specifically in professional and technical, computer systems design, management and technical consulting, administrative and waste services, and employment services. Employment in temporary help services also continued to increase in October. This month’s gain was 35,000; increasing 451,000 since September 2009 lows.

The problem with this growth is that we are behind by 11 million jobs as compared to the pre-recession unemployment rate of 5% in December 2007. To obtain this unemployment rate within the next 5 years, we need to see a net of approximately 300,000 jobs added every month. END_OF_DOCUMENT_TOKEN_TO_BE_REPLACED

A number of recent reports show job growth attributed to the stimulus measures: The Council of Economic Advisors (CEA) shows a creation/retention of 2.5 to 3.6 million jobs over what it would otherwise have been. The Congressional Budget Office (CBO)’s May report indicates that the Recovery Act has created between 1.2 million and 2.8 million workers, and projects up to 3.7 by the end of Q3.

A number of recent reports show job growth attributed to the stimulus measures: The Council of Economic Advisors (CEA) shows a creation/retention of 2.5 to 3.6 million jobs over what it would otherwise have been; nearly one million of those jobs in clean energy or a related field. The Congressional Budget Office (CBO)’s May report indicates that the Recovery Act has created between 1.2 million and 2.8 million workers, and projects up to 3.7 by the end of Q3.