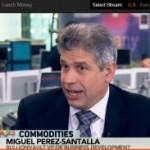 BullionVault  provides private investors around the world access to the professional bullion markets, at the lowest costs for buying, selling and storing gold and silver. Seeded in 2003, the BullionVault service developed the software and raised approximately £3.5m in equity funding for acquiring the gold bars and currency for operation over the next two years. The accessibility, safety and value of bullion afforded by BullionVault quickly made the service popular, and the business traded profitably in its first year of trading (2005). Elected into the London Bullion Market Association in 2008, and awarded the Queen’s Award for Enterprise (Innovation) for use of technology in 2009 and 2013, the company has continued to expand to over 47,000 active customers, from 171 countries, holding approximately $2.2 billion in stored bullion. The BullionVault service is recommended and endorsed by the World Gold Council because the company offers retail investors a secure, cost effective and convenient way to access the physical gold produced by its sponsors — the world’s major mining companies. With such strength in Europe, the U.S. was the logical next place to focus on market expansion.

As a niche technology company, BullionVault sought a tech savvy entrepreneur with deep knowledge of the gold market to become the face of BullionVault in the U.S. The ideal candidate would be well versed in public relations, new and traditional media, and connected to the investment advisor sector. The COO of BullionVault was referred to Redfish Technology, as the technology recruiter of choice for this critical hire and Miguel Perez-Santalla was directly recruited by Rob Reeves. Hand-picked for his 30-year expertise in trading precious metals and foreign currency, including spot delivery, forward delivery and options as well as international banking and payments. His education is in Business Law, Operations Management & Accounting, as well as Foreign Exchange & Commodities Trading. Miguel’s management skills span entrepreneurial individual contributor to private enterprise team management, developed through growing senior and vice president roles in which he was responsible for business development, sales, and marketing. Since taking on his role of VP of Business Development at BullionVault, Miguel has been actively delivering the message of BullionVault’s services to the general public, investment advisors, and the media who are involved in gold and silver markets. He has also been busy enlarging the company’s market presence having been quoted and interviewed on Bloomberg, BusinessWeek, AOL On Business, The Wall Street Journal and HardAssestsInvestor.com among other media specialized in the sector. Mr. Perez-Santalla hosts a radio show called New York Markets Live on blogtalkradio.com and maintains a personal blog about the markets www.preciousmetalslife.com.

“Rob Reeves is a great person and a positive influence. He coached me along the process to the obvious fruit of our labor. Though he represented BullionVault he never lost sight that he was dealing with a person with real concerns. His honesty and professionalism are an asset for both sides of the job search spectrum.” – G. Miguel Perez-Santalla